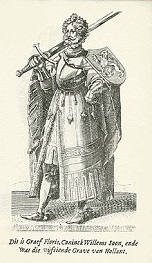 Floris V (24 June 1254 – 27 June 1296) reigned as Count of Holland and Zeeland from 1256 until 1296. His life was documented in detail in the Rijmkroniek by Melis Stoke, his chronicler. He is credited with a mostly peaceful reign, modernizing administration, policies beneficial to trade, generally acting in the interests of his peasants at the expense of nobility, and reclaiming land from the sea. His dramatic murder, engineered by King Edward I of England and Guy, Count of Flanders, made him a hero in Holland.
He was the son of Count William II (1227–1256), who was slain in 1256 by Frisians when Floris was just two years old, and Elisabeth of Brunswick-Lüneburg. First his uncle (Floris de Voogd from 1256 to 1258), then his aunt (Adelaide of Holland from 1258 to 1263) fought over custody of Holland. At the battle of Reimerswaal on 22 January 1263, Count Otto II, Count of Guelders defeated Aleidis and was chosen regent by the nobles who opposed Aleidis.
Otto II served as Floris V's guardian until he was twelve years old (1266) and considered capable of administering Holland himself. Floris’s mother (Elisabeth) continued to reside in Holland after her husband’s death in 1256. She died on 27 May 1266 and is buried in Middelburg abbey church. She died in the same year that Count Floris V was declared old enough to rule without guardianship, on 10 July 1266.
Floris was supported by the count of Hainaut of the house of Avesnes, who was an arch-enemy of the count of Flanders of the house of Dampierre. Floris married Beatrix of Dampierre, the daughter of Guy of Dampierre, count of Flanders, in 1269.
In 1272 he unsuccessfully attacked the Frisians in a first attempt to retrieve the body of his father. In 1274 he faced an uprising by nobles led by the powerful lords Gijsbrecht IV of Amstel, Zweder of Abcoude, Arnoud of Amstel, and Herman VI van Woerden, who held lands on the border with the adjacent bishopric of Utrecht (the area of Amsterdam, Abcoude, IJsselstein, and Woerden) at the expense of the bishop. Gijsbrecht and Herman were supported by the craftsmen of Utrecht, the peasants of Kennemerland (Alkmaar, Haarlem, and surroundings), Waterland (north of Amsterdam) and Amstelland (Amsterdam and surroundings) and the West Frisians. He assisted the weak bishop, John I of Nassau, by making a treaty with the craftsmen. The bishop would become dependent on Holland's support, and eventually added the lands of the rebellious lords to Holland in 1279. He gave concessions to the peasants of Kennemerland. Kennemerland was a duneland, where the farmers had far fewer rights than the farmers in the polders. Floris got rid of the Avesnes influence and switched allegiance to the Dampierres.
In 1282 he again attacked the troublesome Frisians in the north, defeating them at the battle of Vronen, and succeeded in retrieving the body of his father. After a campaign in 1287–1288 he finally defeated the Frisians. In the meantime he had received Zeeland-bewester-Schelde (the area that controls access to the Scheldt river) as a loan from the Holy Roman King Rudolf I of Germany in 1287, but the local nobility sided with the count of Flanders who invaded in 1290. Floris arranged a meeting with count Guy of Flanders, but he was taken prisoner in Biervliet and was forced to abandon his claims and then set free.
Floris immediately wanted to resume war, but King Edward I of England, who had an interest in access to the great rivers for wool and other English goods, convinced Floris to stop hostilities with Flanders. When in 1292 Floris claimed the throne of Scotland in the Great Cause, (his great-grandmother Ada being the sister of King William I of Scotland) he did not receive the expected support from Edward, but England did support his claims in a new, this time more successful, war on Flanders.
After Edward I moved his trade in wool from Dordrecht in Holland to Mechelen in Brabant, to gain Flanders's support against France, Floris switched sides to France in 1296. Edward I now prohibited all English trade with Holland and conspired with Guy of Flanders to have Floris kidnapped and taken to France. The humiliated lords Gijsbrecht IV of Amstel and Herman of Woerden enter the scene again as part of the conspiracy. Together with Gerard van Velsen they captured Floris during a hunting party and brought him to Muiderslot castle. The news of the capture spread quickly; afraid of the people, four days later the lords together with their captive left the castle to get to a safer place. They were stopped by an angry mob of local peasants. In panic Gerard of Velzen killed the count, and the lords fled. Gerard of Velzen was captured later and killed in Leiden. The other conspirators fled to Brabant, Flanders and perhaps to Prussia, to which many colonists and crusaders from Holland migrated.
Floris V was the son of Count William II of Holland and Elisabeth of Brunswick-Lüneburg. In ca 1271 Floris married Beatrice of Flanders, daughter of Guy de Dampierre, count of Flanders and Matilda, heiress of Bethune, Dendermonde, Richebourg and Warneton. Floris and Beatrice had several children including:
- John I, Count of Holland, who married Elizabeth, daughter of King Edward I of England.[2] No issue. After John's death Elizabeth returned to England and married Humphrey de Bohun, 4th Earl of Hereford.
- Margaret, engaged to Alphonso, Earl of Chester, son of King Edward I of England from 1281 to his death in 1284. 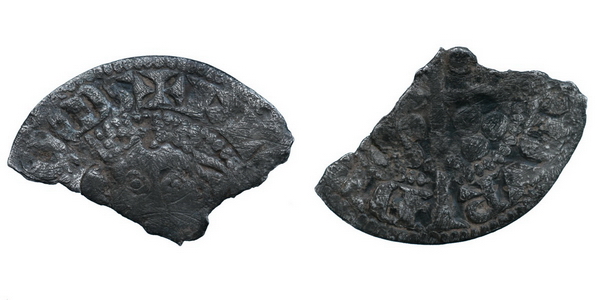